To get a consultation
Imunofan's composition

To get a consultation

The Research-and-Production Enterprise NPP “BIONOX” was founded in 1991 by a group of scientists on the basis of the Laboratory of Immunology and Biotechnology of the Central Research Institute of Epidemiology of the Ministry of Public Health of the Russian Federation under the leadership of Head of the Laboratory Professor V. V. Lebedev, MD, who is currently Director General of the Enterprise.

The purpose and intent of the NPP “BIONOX” are as follows:

The NPP “BIONOX” unites about 150 highly qualified specialists in the area of medicine and high chemical-and-pharmacological technologies.

Engaged in the Scientific Research Division are:

Financing of the innovation research amounts to over 20 % of the total expenditures of the enterprise. All the products are protected by the appropriate patents and trademarks.

In order to provide the possibility of extending the investigations on creation of new peptide preparations, shortening the terms of final adjustment of the manufacturing technologies and implementation of the newly-obtained results into clinical practice, the Research-and-Production Enterprise NPP “BIONOX” and Research-and-Production Association NPO “BIONOX” formed the basis for founding a special chemical-and pharmaceutical Holding “BIONOX” under the general management of Professor V. V. Lebedev.

Nearly 15-year experience in using one of the first synthetic peptide preparations – IMUNOFAN in a variety of clinical applications and distribution thereof through the drugstore network of Russia, to be followed by the experience gained in therapeutic application of the new-generation regulatory peptides turned out to have demonstrated so wide a range of covering and high clinical efficacy of the drugs involved that they may, in a sense, be rather reasonably referred to the category of the products of strategic orientation. Such high appreciation was also obtained under the influence of the experience of the Federal Security Service of Russia, being published, in particular, at the respective site in the Internet.

The reputation of the NPP “BIONOX” as well as its products appears to have rapidly been gaining ground in the countries of the post-soviet territory, as well as in America, Europe, and in the Middle East.

The NPP “BIONOX” is open to scientific-technological and business cooperation, and as a partner possesses the highest-level guaranties of the Russian Federation.

Any pathological process, or systemic disease generally results in impaired regulatory mechanisms of interaction between separate systems, organs and cells; and vice versa, each drastic disorder of the regulatory mechanisms is known to invariably and inevitably induce a particular pathological state of the body. Appropriate correction of the disordered regulatory links by means of drugs essentially promotes recession of the pathology concerned. It seems very important so that the methods and means of restoring the disordered regulatory links could make it as much as possible to directly influence the pathogenetic foci and morbid processes. Research and development of the means and methods of pharmacological pathogenetic therapy, based on selective, target-specific correction of the regulatory mechanisms of interaction between the systems, organs and cells of the live organism can safely be referred to one of the most important trends in medicine of the 21st century. The collective body of the NPP “BIONOX” has successfully been working in this currently important direction for over 15 years.

Amongst various means of correcting the disordered regulatory links and different methods of pathogenetic therapy of diseases, of particular importance seem to be synthetic prototypes of the naturally occurring bioregulators and primarily those of them capable of performing the functions of transferring information and controlling innumberable biochemical bodily reactions, constituting one of the most important component parts of the physical ground of Life.

Information in the system of bioregulation of the body is known to be transferred, inter alia, by means of secreting into the intercellular space the products of cellular protein metabolism – regulatory peptides.

Nowadays we know of three systems of bioregulation:

As has been mentioned above, short-chain regulatory peptides are formed naturally resulting from enzymatic degradation of their high-molecular-weight precursors – peptide hormones of the body. However, short fragments of high-molecular-weight hormones appeared, in some instances, to possess the same properties as their native molecules.

These peculiarity and property of short regulatory peptides formed the basis of creating the known immunoregulator Timunox. In 1974, G. Goldstein (Ortho Pharmaceutical Corp., Raritan, N. J., USA) isolated from the thymic tissue a peptide hormone of immunity – thymopoietin. The purposeful search for functional active centres was followed by synthesizing a fragment of thymopoietin – a pentapeptide corresponding to the position 32-36 of amino acids of thymopoietin. The synthetic pentapeptide given the name thymopentin (TP-5) exhibited the full biological activity of the natural hormone. Clinical trials of Timunox manufactured by the CILAG spa, vialle Europe 51/53, 20093 Cologno Monzese (MI) demonstrated its high therapeutic efficacy in treatment of herpes, chronic lymphogranolomatosis, and in a series of other diseases accompanied by a concomitant disorder of the immune system. However, shortly after the successful completion of the clinical trials, production of Timunox was all of a sudden discontinued…

The collective body of the NPP “BIONOX” has worked out own chemical-and-engineering scientific-technological method of producing synthetic regulatory peptides with a predetermined qualitatively peculiar action. The method was based on the theoretical idea of target-specific modification of the structure of natural bioregulators by ways of peculiar, ingenious variation of the quantitative composition and sequence of the amino acid residues of short regulatory peptides.

One of the first regulatory peptides synthesized by means of the chemical-and-engineering technology was manufactured more than 15 year ago. The pharmaceutical agent obtained and dosage forms based thereupon received the name Imunofan.

Imunofan, like Timunox, was synthesized based on the thymic immunity natural peptide hormone – thymopoietin. But this preparation as the active pharmacological substance contains a hexapeptide with the structural formula arginyl-?-aspartyl-lysyl-valyl-tyrosyl-arginine and a molecular weight of 836 Da. Preclinical studies, large-scale clinical trials and years of experience in therapeutic application of Imunofan in the most authoritative clinics of Russia and distribution thereof thorough the drugstore network convincingly showed that the new drug was substantially, hundreds of times, superior by the qualitative peculiarities of its action and efficacy not only to Timunox but to their natural prototype.

The birth of a new theoretical provision on a possibility of creating synthetic regulatory peptides by means of targeted variation with the composition and sequence of molecules from the number of the natural prototypes formed the basis of creating a whole generation of hyperactive bioregulators exhibiting a qualitatively peculiar action on various functions of the body.

Amongst new regulatory peptides created by means of chemical-and-engineering synthesis also obtained were compounds possessing a qualitatively peculiar action which appeared highly promising in relation to such an urgent clinical need as overcoming multidrug resistance. These peptides are capable of selectively influencing only the cells carrying the trait of multidrug resistance. For the first time in the world the mentioned property was found in peptide drug Imunofan, with the clinical outcomes of studying this phenomenon having been reported in the scientific edition “Proceedings of the Academy of Sciences”, 2004, Vol. 395, No 6. However, the activity of new regulatory peptides is tens of thousand times higher than that of the known analogues by the efficacy of the selective action. With high specific activity, these peptide preparations also demonstrated a high level of purity with virtually no undesirable side effects. 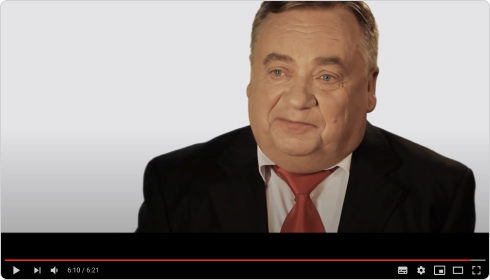 The collective body of the NPP “BIONOX” has recently worked out and brought to a commercial level the industrial technology of synthesizing hyperactive regulatory peptides selectively influencing the cells with the trait of multiple drug resistance. A series of such drugs successfully passed the stage of preclinical trials, having been protected by the appropriate patents, or being presently patent pending.

Scientific-and-technological studies aimed at improving the methods of chemical-and-engineering synthesis and creation of new regulatory peptides are currently being developed intensively.

Synthetic peptide immunoregulator Imunofan is one of the first drugs created according to the technology of chemical-engineering synthesis 15 years ago.

Imunofan was synthesized based on the natural peptide thymic immunity hormone – thymopoietin. The drug contains as the active pharmacological substance a hexapaptide with the structural formula arginyl-?-aspartyl-lysyl-valyl-tyrosyl-arginine and a molecular weight of 836 D. The composition and sequence of the amino acids are protected by the RF patent No 2062096. Large-scale clinical trials and years of experience in therapeutic application of the drug in the most authoritative clinics of Russia have convincingly demonstrated that Imunofan as an effective immunoregulator has currently no alternative in world medicine.

Up to now, we have worked out, implemented and been using the technology of industrial production of 3 dosage forms of this drug:

The Imunofan’s pharmacological effects are based primarily on its properties and capabilities to:

The “Instruction on medical application of Imunofan” approved by the Pharmacological Committee of the Ministry of Public Health of the Russian Federation with the Protocol No 14 as of December 22nd, 2003 contains the following Indications for use of the drug both alone and in comprehensive therapy:

The indications referred to in the “Instruction for medical use of Imunofan” are being continuously confirmed and specified by practical experience in clinical application of the drug. Below is a part of assessments of the drug’s efficacy observed in practical medicine.

Administration of Imunofan during preparation for and between the courses of chemo- and radiotherapy induces:

2. Correction of the immune system, namely:

The Ministry of Public Health of the Russian Federation on November 29th, 1997 approved the Manual for Physicians “Administration of Imunofan as a protector and detoxifying agent in chemo- and radiotherapy”.

Administration of Imunofan to patients with chronic viral hepatitis induces:

Introduction of Immunofan into the regimen of comprehensive therapy of patients with pyo-inflammatory processes promotes:

The extent of positive practical experience and the number of publications concerning high therapeutic efficacy of Imunofan in a vast variety of diseases are growing rapidly both in Russia and in other countries. Part of the information involved is readily available at the respective sites of the Internet in the Russian, English and German languages .

Modern aspects of peptide immuno-modulating agent use in the system of vaccinal prevention and vaccinal therapy. Lebedev V. 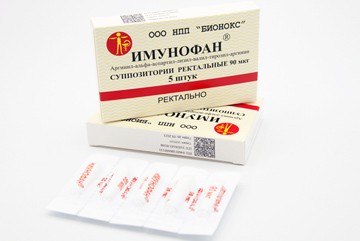 Imunofan suppositories 90mkg No. 5
More Where can I buy 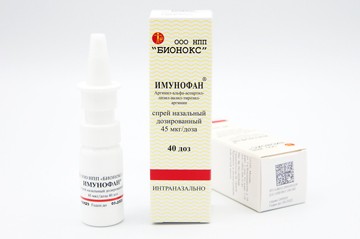 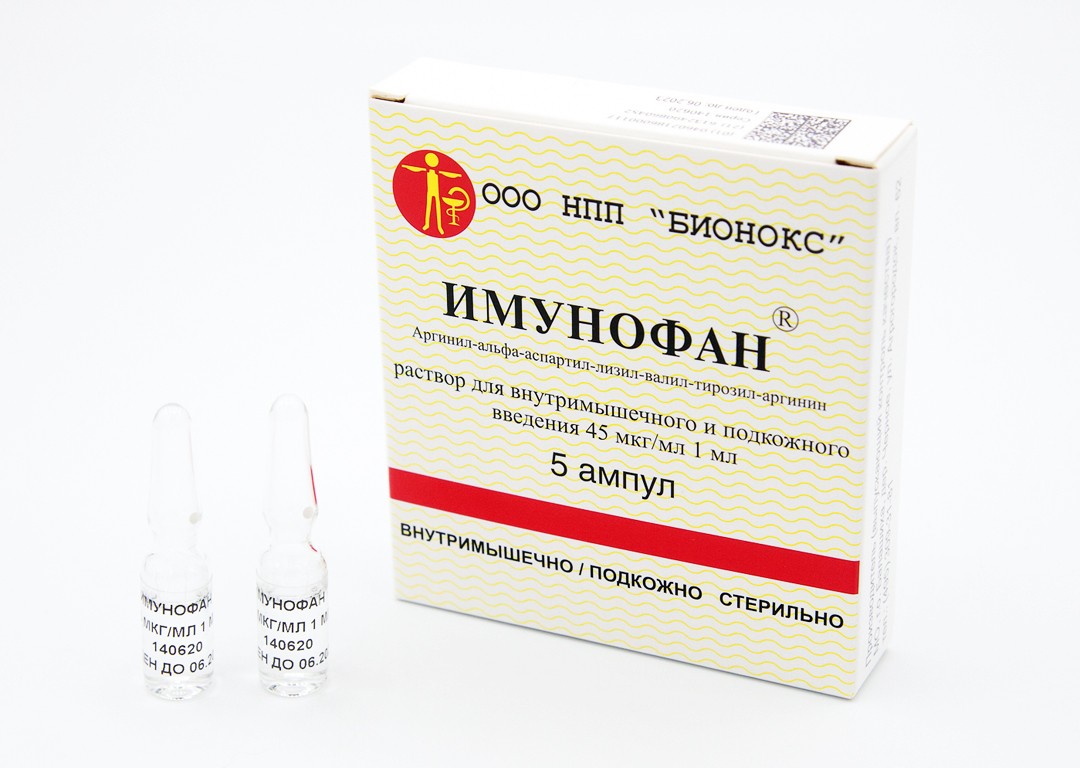 Imunofan ampoules solution 45mkg / ml 1ml No. 5
More Where can I buy

Still have questions?
Our specialist will answer them